skip to main | skip to sidebar

The Magisterium Part 1 of 4 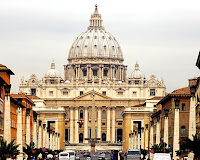 The Magisterium: What is it and why we need it
By Dr. Marcellino D'Ambrosio

Part 1 of a four part series on the role the magisterium or sacred teaching office of the bishops and pope of the Roman Catholic Church.


AUGUST 24, 2008 (www.crossroadsinitiative.com) - All Christians can agree on this, that the Bible is God’s authoritative and inspired word, and ought to govern the faith and life of the Christian community. What’s in accord with Scripture is good. What contradicts Scripture must be rejected.

The Protestant Reformers, inspired with zeal for God’s word, went one step further. Under the banner of “Sola Scriptura” they proclaimed the Bible as the only infallible authority for Christians. That meant that both Tradition and Church authority could be opposed in the name of fidelity to Scripture.

Funny thing, however. From the outset of the reformation, the movement that agreed on the supreme authority of the Bible disagreed bitterly on what the Bible said. The Protestant Church was divided from the beginning. Nearly 500 years later, we see thousands of competing churches claiming the same Bible and sola scriptura heritage.

That’s because the Bible is a collection of written documents. And one of the truths about all written documents, even if they happen to be inspired by the Holy Spirit, is that they can be interpreted differently by different people.

The founding fathers of America knew this. That’s why in addition to providing a constitution for the United States, they set up a court system to serve as the ongoing, living authority to interpret and apply that written document. If the country was to maintain its unity, someone in every generation would have to be entrusted with the authority to determine what was in accord with the Constitution and what was not. In the USA, that’s the responsibility of the Supreme Court.

We can also see this operating in organized sports. Every sport has a rule book. But in baseball for example, bitter arguments arise as to whether a ball is fair or foul, and whether a runner is safe or out. Umpires therefore are an absolute necessity in every game, so that someone has the final say on how the rules are interpreted and applied.

The Lord Jesus Christ is certainly no less wise than the founding fathers of the US government and the commissioner of baseball. In establishing his Church, he did not Himself write anything, except in sand (Jn 8:8). Instead, he established the college of the apostles, gathered around Peter, as a living teaching authority, entrusted with passing on and teaching all that they’d received from Jesus. They did this through oral instruction and eventually some writings. Through the laying on of hands which we know as the sacrament of holy orders, the apostles in turn entrusted their teaching authority to their successors, called bishops, and imparted to them the same charism of truth that they’d received from the Holy Spirit (CCC 861-862).

These successors discerned which of the many Christian books and letters bearing names of apostles actually were authentic and deserved to be regarded as sacred scripture. Thanks to them, the phony gospels of Thomas and Mary Magdalene are not read every Sunday in our churches. They also passed on and interpreted apostolic traditions that were not written down in the New Testament books, like the practice of meeting for weekly worship on Sunday, the day of the Lord’s resurrection, rather than Saturday, which was the Jewish Sabbath. Finally, they were the ones responsible to authoritatively interpret and apply the sacred scriptures amidst dispute and controversy, such as the fourth century controversy over the divinity of Christ.

This teaching role of the successors of the apostles, gathered around the successor of Peter, is called “the Magisterium,” which simply comes from the Latin word for teaching office. The Magisterium is not superior to the Word of God coming to us through Scripture and Tradition. Instead, the Magisterium is clearly under its authority–it is the servant of the Word. Its role is to faithfully safeguard the truth about God and his plan for our lives which came to full expression in the teaching and saving work of Jesus Christ, the Word made flesh. It is not to add to God’s revelation or to subtract from it. Only to faithfully interpret and apply it (CCC 85-86).

The Magisterium is supposed to function much like the Supreme Court at its best or a good umpire. But there is a few very big differences. Neither the Constitution of the United States nor the official baseball rulebook are documents inspired by the Holy Spirit. The Bible, on the other hand, is. Neither the Supreme court nor the world series’ umpires have received a promise of special divine assistance. But the successors of the apostles have. Speaking to apostles, Jesus said “he who hears you, hears me” (Lk 10:16). The Magisterium speaks with the authority of Christ, guided and empowered by the Spirit of Truth.

So ultimately there is no opposition between the Bible and the Magisterium of the Church. In fact they are so interdependent that the New Testament itself calls the Church “the pillar and bulwark of the truth” (I Tim 3;15).

Biblical authority and Church authority–you can’t have one without the other.

Full story from ParishWorld.net
Posted by Editor @ Parishworld.net at 9:31 PM

This is our Online Prayer Room. Share with us your prayers, testimonies, reflections and thoughts.

We build Catholic websites that make a true Catholic difference. Call us at (866) 288-0713 if your parish or Catholic organization is struggling to find a deeper meaning for the mission of your online presence.

The "For Catholics Series" by ParishWorld.net